The Bahrain sugar refinery project had a somewhat unusual start in that it arose from a previous attempt to develop a refinery on the island that had not managed to secure a suitable site. There was, therefore, already a possible specification developed by a preferred contractor. SKIL's involvement with the project started in 2008 when it was appointed to prepare a formal Client's Requirement document and hence agree a formal Technical Specification and Contract T's & C's with the preferred contractor. We also worked with the company's environmental consultant on the EIA required to gain planning permission and assisted the company in its discussions with various sources of funds.

The preparation of the Technical Specification essentially required SKIL to undertake a full Front End Engineering package from the process engineering to all of the other disciplines. It rarely makes sense for us to undertake the civil and structural engineering nor the associated architecture as these all require local knowledge. We therefore asked the company to appoint a local consultant with whom we worked on those aspects of the FEE and subsequent discussions with the preferred contractor.

2009 was a consolidation year with the company working hard to finalise its funding and to secure the all important permissions. The opportunity was taken to finalise the proposed contract which was to be on a semi-turnkey basis, the company [Employer] being responsible for below-ground works. The contract, of course, could not become effective until the funding was sufficiently complete for the company to make the down payment. That happened in early 2010.

It was clear from the start that the original specification, essentially a copy of a refinery developed elsewhere by the preferred contractor's process house, did not reflect the particular conditions of Bahrain nor took into account modern refining practices. SKIL therefore had to make appropriate changes, fully supported by new mass balances. The objectives were to optimise yield, energy consumption, staffing levels, water consumption and consumables.

Some of the key aspects of the design concept are :

SKIL was appointed us as the overall Project Manager, responsible for the coordination of the main contractor and all of the other parties such as the various local consultants and the contractor for the civil engineering works. We were also responsible for liaison with the many authorities and the landlord of the site, Bahrain International Investment Park. Another part of our work was in helping the company finding and appointing the senior management team of the refinery.

Such a project is complex and passes through several distinct phases so the project management role is equally complex. In the case of the Bahrain refinery there were design houses in several European countries plus, of course, Bahrain. Also in Bahrain were the Client, the many government departments required to give approvals and the various authorities that would be supplying the utilities and services that the refinery would require. All had to be coordinated, not just in the design phase but also during construction and, subsequently, commissioning. Part of the role was, of course, reporting frequently to the Client on project progress and agreeing how to handle the issues that arose.

Acting as the Employer's Representative, we supervised the various contractors to ensure that they complied with their contracts in all ways. The disruption in the Middle East [see below] during the implementation made that particularly difficult but was achieved fairly and in accordance with the terms of the contracts, all of which were based on FIDIC model forms.

In the case of the Bahrain Refinery, the promoters and client had no existing sugar operations or even experience of the sugar industry. SKIL therefore helped the newly created company establish contacts with sugar traders to secure the raw sugar supply and identified the key members of the management team to the point where that team was then able to take over responsibility for recruitment of the staff.

Unfortunately, the 'Arab Spring' of 2011, the associated riots in Bahrain and the subsequent near-collapse of a major lender disrupted the project for over two years. Once normality returned SKIL set to work to minimise the delay in completion. Cold commissioning started in mid 2013 and the first raws, a small commissioning cargo, were received shortly thereafter. Hot commissioning took somewhat longer than planned because the turbine had been in storage for nearly two years longer than anticipated so the rotor had to be re-balanced before the site was on its own electricity.

The first melt was in November 2013 and the first crystals - not perfect of course but remarkably good colour - followed in a few days : 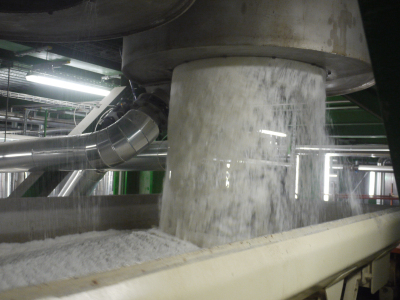 Thereafter it was a question of building up the production rate and continuing to flush through the system on remelt. The first sugar to pass all of the QC requirements was bagged off in December and the first performance trials at full capacity took place in Q1 2014.

The contents of this domain are intended for general information only and are not intended to serve as professional advice. Whilst every precaution is taken to ensure the accuracy of the information presented, the company shall not be liable to any person or company for inaccurate information or opinions contained herein. Nor shall the company be liable to any party for any direct, indirect or other consequential damages as a result of any use of this domain.

Additionally, the company does not make any representations regarding other web sites which may be accessed through this domain and accordingly accepts no responsibility for the content or use of such sites.